The Euphoria of the 2014 Boston Marathon 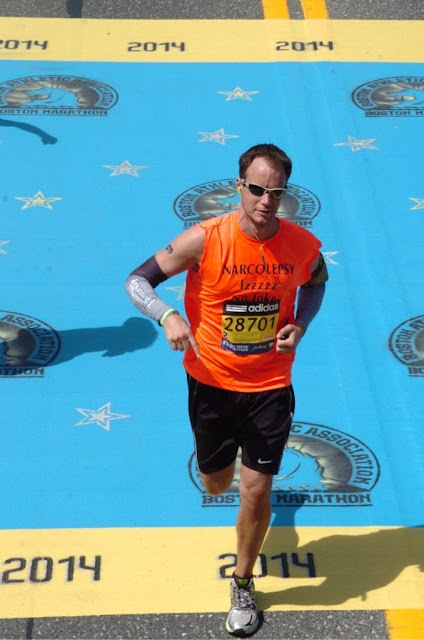 
WE ALL RUN BOSTON, THE SLOGAN OF THE 2014 BOSTON MARATHON WAS A FITTING MANTRA FOR THE HISTORICAL RACE THAT WAS SO MUCH MORE SPECIAL THIS YEAR; WITH 33,000 RUNNERS, A MILLION PEOPLE LINING THE COURSE FROM THE START TO THE FINISH LINES AND AN UNIMAGINABLE NUMBER FOLLOWING THE RACE WORLDWIDE, I KNEW I WAS NOT ALONE OUT THERE, AND THAT SPIRIT CARRIED ME THROUGH THE TRAINING, THE FESTIVITIES LEADING UP TO THE RACE AND THROUGH THE RACE ITSELF.

It did not, however, prepare me for the run of a lifetime. Having previously run two marathons and thousands of kilometers, I thought I had a good understanding of what it takes to run another marathon. Throughout the training and preparation I constantly imagined the experience I was embarking on, but running Boston, particularly this year following the heinous terrorist attacks, my expectations were thrown out the window. The moment I stepped off the plane in Boston it all changed; I was instantly hit with an overwhelming feeling of privilege and honour, which I will hold with me for the rest of my life.

On top of the euphoria that surrounded this year's marathon, what made it that much more special for me was the fact that I was participating as one of 14 members of the Wake Up Narcolepsy team, a charity that works to raise funds and awareness in support of narcolepsy research and awareness across Canada and the United States. In Canada, Wake Up Narcolepsy is currently partnering with Sick Kids Hospital to help achieve these goals.

In the lead-up to the race I was able to meet with doctors and researchers who are working to raise awareness and find a cure for this debilitating neurological disorder. I was also able to meet with and receive support from children and families who have narcolepsy. Their stories were extremely touching and provided strength during moments of incredible pain on training runs and during the race.

Despite the advances that have been made in communication tools, too many people are unaware of what someone with narcolepsy suffers through; people do not understand that individuals who have narcolepsy have brain cells dying, that they cannot control when they sleep or when they are awake, and that every day is a struggle to maintain some form of normalcy in their lives. And, perhaps just as bad, very few actually understand that narcolepsy is an incurable medical condition and instead have negative perceptions of people suffering with narcolepsy or they think it is a joke. It is up to each of us to do our part to educate society, and particularly, our teachers, doctors and parents so they can recognize the signs, and lead children and young adults to a proper diagnosis. Although diagnosis itself will not alleviate all of the struggles an individual with narcolepsy may have, it allows for treatment and support to help them find this semblance of normalcy they seek.

I can say with absolute certainty that being able to raise money to help this charity, being able to cross the start line, being able to run the 42.2 kilometres and being able cross the finish line in Boston on the one year anniversary of the terrorist attacks will be memories that will last a lifetime.

Throughout race weekend there were countless moments I could share but I will try to provide some of the highlights. I have already mentioned the overwhelming feeling of honour and privilege I experienced as I stepped off the plane, but nothing compares to the emotions I felt as I walked up Boylston Street on the Thursday before the race, past the finish line, which was already erected and to the place of the bomb blasts the year before. Standing there, I looked around and felt an indescribable feeling overtake me; at that moment I decided I wasn't going to "race" this run but ensure that no matter what, I soaked up the entire experience. As it turned out this sentiment was shared by a number of the runners I spoke with. This didn't stop me from posting a personal best on the first half of the run, but it likely took a toll over the course of the entirety of the race.

Since the race I have constantly been asked, "What was it like?" I have yet to accurately describe it and I do not think I will ever be able to. What I can say is that it was the most amazing and euphoric experience of my life; the sheer emotion and the atmosphere that surrounded the festivities leading up to race was only surpassed by that of the race itself.

No matter where I went, or who I encountered, whether a race volunteer, a police officer, another runner or their family or friends, waitresses, drivers and so on, the moment I mentioned I was participating in the marathon there was a shared sense of absolute pride accompanied by support, encouragement and well wishes. This certainly was Boston Strong! And, I knew for certain that, yes indeed, We All Run Boston!

The second most frequent question I am asked is whether I was scared or nervous considering the attacks from the year before. Honestly, not for a moment. The race officials did a superb job of ensuring that we felt safe and secure. Beyond that, whether as a result of the police presence or the support in the crowd, we all knew that nobody was going to let something like that happen this time around. Not this time, not this year, not in Boston!

As for the race itself, there is nothing I can say that will ever do justice to the spectacle that is The Boston Marathon. As the race started in Hopkinton, I honestly thought there was something wrong with my headphones because I couldn't hear the music coming out of them - there was nothing wrong - the cheers from the crowd simply overpowered them. This support never ceased. Children, men and women - young and old lined every mile of the course to do their part to show us support - it still brings a tear to the eye to think about the encouragement these people provided – I knew that this was much bigger then simply another race for them. This was a show of force. I knew that, if at any moment, I felt like I couldn't go on, these people would lift me and carry me with their presence. As I ran, I broke many of my own rules and allowed myself to take it all in - giving high fives to children and men and women throughout the race and getting lost in the emotion. Did it hurt my time? Perhaps, but do I care? Absolutely not, it was simply remarkable to be able to participate. I will always have the memories of the crowds of supporters, including times where it felt like I was running for miles in a tunnel because people lined both sides of the street 20-30 deep, going wild in an effort to cheer all of us on.

As I came up to the end of the race I was labouring, dehydration had set in and it was a painful finish. I was certainly pushing my body to its limits; for the first time in my life (and many years of sports and running) I had legitimate "jello leg" on two strides and I thought I was going to collapse. However, there was no way that was going to happen. I channeled the support I received from my friends and family, from all the children and individuals who suffer from narcolepsy, and from the millions around the world who were supporting all of us participants.

Running down Boylston Street, coming up on that finish line and crossing it, I was filled with a sense of accomplishment, as I knew I had left it all out on the course. Despite being extremely dehydrated and in an enormous amount of pain I was left looking forward to the next one. This experience certainly left me wanting more!

Whether I have the privilege to run Boston again or whether it is another marathon, I will never forget the euphoria, the emotions and images of support that were present during this 118th running of the Boston Marathon. For that I am thankful to everybody who helped make this race so special!


Justin Ferguson is the Principal of Cosmos Strategies, the Founder of aSmarterWay.life, an avid marathoner, a supporter of charities, including: Wake Up Narcolepsy and Sick Kids Hospital, and a believer that anything is possible.
Posted by Unknown at 12:22